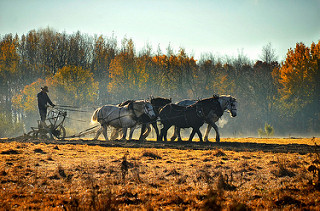 Friedensruh-   After listening to a recent sermon on the evils of modernization delivered by Elder Frank Wiebe of the Reinlander Church, area farmer Issac Fehr has decided to revert back to using horses in his farming operation.

Apart from religious motivations Fehr indicated that he has become increasingly disenchanted with the smell of diesel fumes emitted by tractors and also that he really missed the “sweet aroma” of horse manure.  Fehr also indicated that he has always been  uneasy about the move from horses to tractors noting; “that very issue caused many Mennonites to move from Canada to Mexico in 1927″.

Fehr estimates that he will need at least 60 horses to replace his three tractors. Fehr admits that the cost of feeding and housing the horses will add an additional expense to his operation but argued that it would also create additional jobs.

When asked where these additional workers might come from Fehr stated: ” there may well be some Mennonites from Mexico returning to Canada following the Trump win which will effectively bar them from entry into the United States”.

Fehr indicated that he has not yet decided if he will be replacing his Chevy Suburban with a horse and buggy.  “The missus may have something to say about that”.

One thought on “Area farmer to revert to horse power”